An Overview of Six Sigma Methodology in Project Management 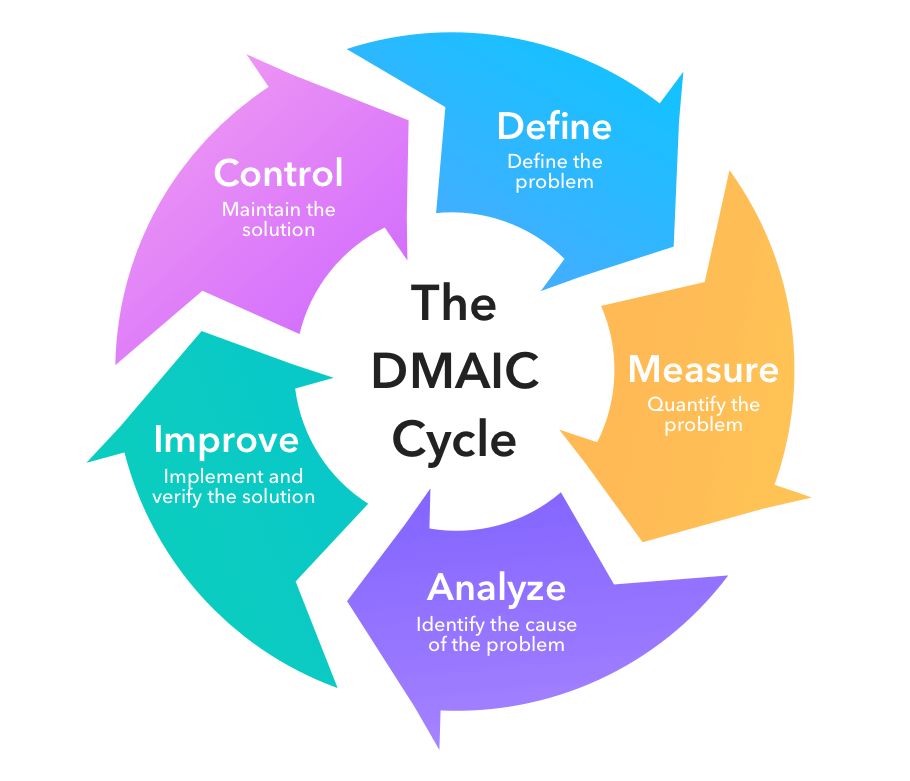 Six Sigma was first introduced in the 1980s by Bill Smith, an engineer at Motorola. The initial idea behind this methodology was to significantly improve the company’s processes by identifying and removing defects while simultaneously improving product quality.

In other words, processes operating at six Sigma produce virtually no defects (more specifically, 3.4 defects per million products). Although this ideal is what most manufacturing companies strive for, the bulk of them operate at four or five Sigma. That results in a substantial loss of revenue due to usually avoidable errors in the manufacturing process.

Here is a visual representation of the Six Sigma scale:

Although developed with the processes of large manufacturing companies in mind, the Six Sigma methodology found its applications within other industries, as well. All businesses strive to improve their processes and increase profit. Therefore, the techniques and tools Six Sigma proposes align with the business goals of reducing cost and minimizing or eliminating errors, all the while increasing customer satisfaction.

The way Six Sigma seeks to accomplish that is by introducing quality management, alongside precise statistical methods to help build an infrastructure within an organization that would result in the best performance.

Why Do Companies Opt for Six Sigma?

As is the case with every project management methodology, it is critical to identify which approach would be the best fit for your current project. That said, there is another important consideration regarding Six Sigma. With an operational focus, the Six Sigma methodology doesn’t provide a project framework. Instead, it aims to improve the processes that are already in place and increase the overall productivity and profitability of an organization.

In other words, Six Sigma isn’t a project management methodology, at least not in a traditional sense. Rather than defining what needs to be done, how, and by whom, Six Sigma relies on an existing framework to streamline the processes that are already in place. However, that does not diminish the value businesses can get from leveraging Six Sigma. It merely means that utilizing Six Sigma alone for project management purposes can be quite tricky.

In fact, project management and Six Sigma approach the challenges a business faces from different angles. While project management provides the necessary framework and defines how a project will be executed, Six Sigma troubleshoots various problems that may occur during execution and seeks to solve their root causes.

What this means is that Six Sigma works best in conjunction with other methodologies and enables continuous improvement of processes previously established by the selected project management method.

At its core, the Six Sigma methodology is all about eliminating waste and minimizing defects and variations of a product or service. Regarding waste, the concept doesn’t strictly pertain to wasted materials or resources during production. Instead, Six Sigma also aims to cut down on wasted time by eliminating or streamlining extremely time-consuming activities and improving efficiency.

In terms of defects and variations, Six Sigma almost inherently assumes the continuous development of the same product or the delivery of the same service. With that in mind, it may not be a good fit for companies who are working on a variety of different projects, especially if they imply different approaches.

That is the case because Six Sigma project management relies on processes that can be precisely defined and are measurable. In order to make the most of the tools and techniques Six Sigma brings to the table, it is necessary to have a wealth of reliable data that can be analyzed to identify problems and areas which can be improved.

That said, Six Sigma can also be used to revamp an inefficient process, or, when necessary, design a new one. Regardless of the type of business, the goal is always the same — Six Sigma should lead to drastic process improvement, increased efficiency, and improved customer (as well as employee) satisfaction.

The Main Benefits of the Six Sigma Methodology

As you can see, change is at the core of Six Sigma. It burrows into every aspect of a business and seeks to identify areas where a more efficient approach will lead to significantly better business results.

With that in mind, here is what Six Sigma can do for your organization:

Six Sigma puts the highlight on data analysis and provides an accurate assessment of your company’s processes. It relies on hard data that will allow you to make informed decisions, rather than trying to guess where something went wrong.

Applying Six Sigma is an effort the entire company needs to be a part of. Therefore, it inherently calls for better communication between different departments, as well as a higher degree of collaboration. With the Six Sigma methodology, the accent isn’t on individual performance or mistakes, but rather on identifying growth opportunities the company as a whole will benefit from. Therefore, teams and team members will be looking at business objectives as common goals to strive toward, rather than competing in performance with other divisions.

The quality of products and customer satisfaction are in direct correlation. By reducing defects or variations, you’ll be able to consistently provide your customers with superior quality products. That holds true for manufacturing processes, but also for various services. Quantifying and measuring the processes and leveraging that data to iron out any flaws will inevitably result in higher customer satisfaction.

Inefficient processes and sub-par products drastically lower the company’s revenue. The cost of all the managerial, design, and engineering changes quickly adds up and can have a disastrous effect on the overall business. Missed deadlines and flawed products lower customer satisfaction and can lead to a loss of clients. Six Sigma does not tolerate these types of mistakes. Instead, it relies on experts to root out the causes of these setbacks through detailed data analysis and careful review of all processes.

By attacking the root of the problems, Six Sigma prevents them from reoccurring in the future. Simultaneously, it optimizes the processes, allowing every team member to operate at maximum efficiency. By correctly applying Six Sigma, you eliminate any redundant work and backtracking, thus allowing team members to focus on more important tasks.

The Six Sigma methodology is most often utilized by medium-sized and large organizations. Therefore, introducing it into a business typically requires ample resources.

As a result, some organizations opt to outsource the endeavor and employ a third party to provide these services. The other approach is to make adhering to the principles of Six Sigma an integral part of the job for every employee, regardless of their position in the company’s hierarchy.

Regardless of the approach, Six Sigma is applied company-wide. Additionally, the highlight is on teams, rather than individual members. That said, different teams have varying Six Sigma certification levels, which directly correspond to their expertise and job responsibilities.

These levels function similarly to belts in karate, which is why they are often referred to as Six Sigma belts: 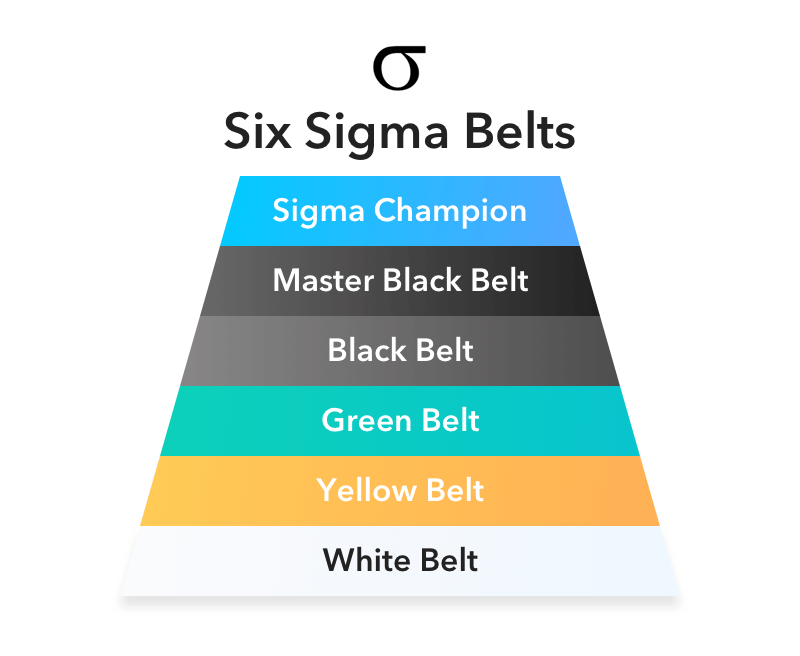 It’s evident from the way teams are organized in Six Sigma that this methodology relies on strong leadership. Additionally, every member of the organization must understand and be on board with the effort. That is the only way to guarantee that implementing Six Sigma will yield the desired results.

Six Sigma offers two sub-methodologies, which allow businesses to tailor this approach to a specific project or industry. Although they share a common goal of improving processes, there are a few key differences between the two.

The acronym DMAIC is derived from the five steps of the framework this sub-methodology follows:

The first step when applying this approach is to identify the problem and the goal. On top of that, you have to go over the available resources and assess the project scope. All the information is compiled within a project charter. That includes collecting all the relevant data, defining the work and the objectives, and forming a team to be assigned on the project.

In this phase, the Belt in charge of the project establishes a baseline that will serve as a point of comparison during process improvement. The previously collected data is given context, and every team member is brought up to speed regarding what will be measured and how.

This part is where the project team takes a closer look at the process and analyzes the data to identify and eliminate the root causes of the problems that are preventing progress. The analysis phase includes utilizing complex analytical tools and detailed mapping of the process.

Here’s where the team comes up with, tests, and implements the solutions. Individuals with strong problem-solving skills are critical in this phase. The accent is on finding the simplest solution that will eliminate the problem and prevent it from reoccurring.

After implementing the solutions, process control is essential to determine whether the improvements made are sustainable. Typically, this phase involves creating a control plan, which enables you to monitor and assess the impact of improvements and make adjustments when necessary.

The five steps are repeated for every process that can and should be improved. It’s also crucial to share the results with everyone involved in the project, to boost team morale, and ensure every team is aware of their contribution.

The other sub-methodology of Six Sigma isn’t used as frequently, primarily because it concerns planning a process from scratch. In other words, rather than improving an existing one, DMADV seeks to create a new process that will have a strong positive impact on the business. Typically, these processes revolve around either developing a new product from scratch or improving customer relations.

The first phase of DMADV is usually defining the specific needs of the market, client, or customer.

Again, the team relies on raw data to gain detailed information regarding those needs, evaluate the audience’s response to a product, or assess the capabilities of a new product or service the company plans to introduce to the market.

The team members then analyze the data to create project goals and come up with designs that will meet the clients’ needs.

This step is where the team relies on their findings to develop a process, product, or service that will address the same needs.

The final stage involves presenting the design solution to a client or monitoring its effectiveness to determine the success of the project.

To maximize the effectiveness of the DMAIC model, companies rely on a set of Six Sigma tools.

Among the essential Six Sigma tools, we have:

Is the Six Sigma Methodology the Best Option for Your Project?

Every company must answer this question for itself. It’s best to compare different methodologies against each other by evaluating the benefits, potential drawbacks, and cost of implementation. If Six Sigma is a strong candidate, there are a few things you need to consider before deciding to implement it.

As we’ve mentioned, Six Sigma was created with the goal of improving manufacturing processes. Therefore, large-scale companies that continuously produce the same products or deliver the same services will likely benefit from this approach the most.

Also, note that Six Sigma project management focuses on incremental improvements. In other words, it does not support radical changes to the process and might not be the best fit for companies oriented toward finding new, innovative solutions. The essence of Six Sigma is the improvement of existing processes.

Additionally, Six Sigma doesn’t provide a project framework. Relying on it alone for project management can prove to be a daunting task. This approach is most likely to yield satisfactory results. That is especially true when combined with another project management methodology.

Finally, in order for Six Sigma to be effective, it must be incorporated company-wide. In other words, every team member must undergo extensive Six Sigma training. As you can imagine, this requires time and ample resources. So, you must be confident that the results Six Sigma will yield justify the necessary effort to implement it.