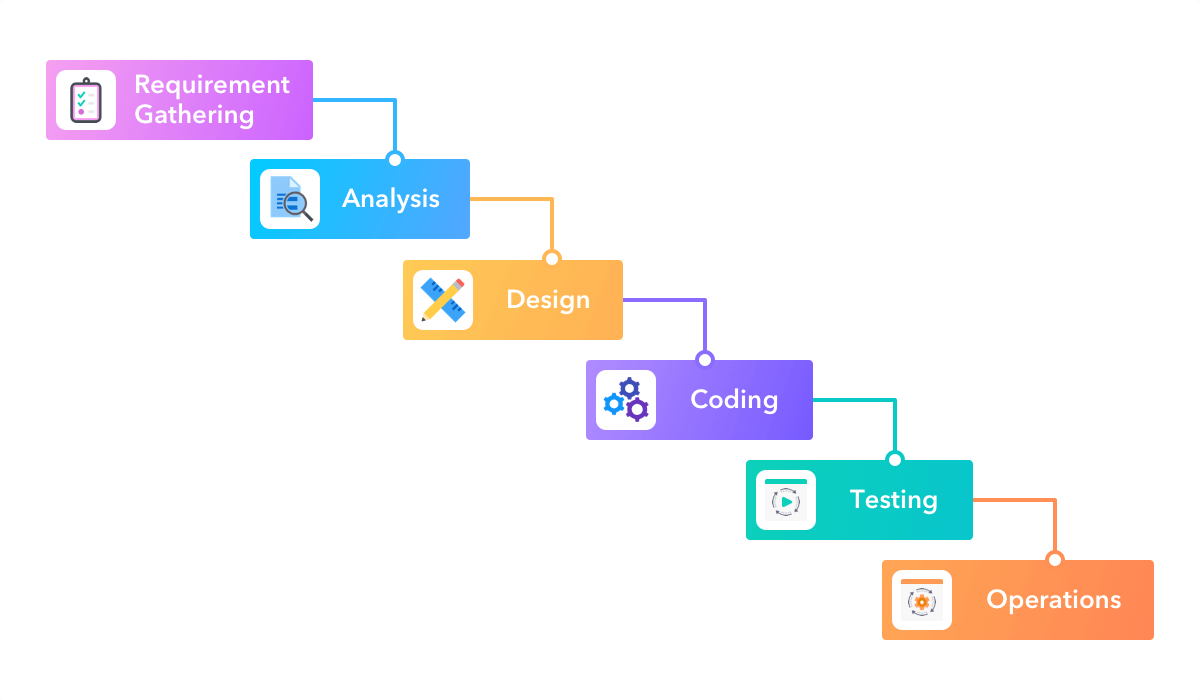 The Waterfall methodology is a linear approach to project management. It emphasizes logical sequencing throughout the software development life cycle (SDLC). Put simply: the previous phase of the project must be completed before moving on to the next.

Waterfall projects start by gathering all the requirements and are executed through a sequential project plan designed to accommodate those requirements.

The graphic representation of the Waterfall methodology closely resembles cascading steps of a waterfall, hence the name. This project management methodology was first introduced in 1970, in a paper published by Winston W. Royce.

Although engineered for software development, Waterfall project management was quickly picked up by other industries. That was mainly due to its logical sequencing, which made it remarkably easy to understand and implement.

Although Waterfall’s popularity has waned over the years (and with the rise of Agile project management), it still remains relevant to this day. Throughout this article, we’ll explain how the Waterfall model functions, what its advantages and drawbacks are, and when it is best to utilize this methodology.

Despite the fact that many industries can leverage the Waterfall model, we will be discussing it in the context of a software development process.

The Six Stages of the Waterfall Model

The Waterfall model method is rather straightforward. It employs a step-by-step approach and typically breaks down the project into the following stages:

Before any work on the project can begin, it is absolutely necessary to gather all the requirements from the customer and/or stakeholders. That allows the organization to plan and map out the entire project, without any further involvement from the client.

In the second stage, the developers rely on the requirements document to analyze the system and flesh out the models and business logic they’ll use to design the application. This step usually involves brainstorming both logical and theoretical design solutions.

Once the project moves to the design phase, the team members take the solutions concocted in analysis and, if necessary, alter them to meet the hardware and software capabilities of the system. That is also when the developers go over the technical requirements of the project, such as the programming language they’ll be using, data layers, services, and so on.

Before this phase is complete, developers must have a concrete plan for translating the theoretical solutions into concrete specifications.

Many organizations refer to this stage as “Implementation.” Regardless of how you name it, this step is when the developers write the actual code, following the specifications listed in the previous phases of the project.

After the code has been written, Quality Assurance, beta testers, and other testers will thoroughly examine the software and report any and all faults, defects, and bugs they run into. In some cases, that may require repeating the coding phase to ensure all the bugs are addressed and all flaws ironed out. After confirming that the application works as intended, the project can move to the final stage.

The last stage involves deploying the application in a “live” environment. However, the job doesn’t end once the software reaches the customers. This phase also includes the necessary support and maintenance to ensure the application is working correctly and is up to date.

The Main Advantages of the Waterfall Methodology

Although the Waterfall methodology is slowly being pushed back by more Agile approaches to project management, it still has its merits. Larger organizations with a fixed set of procedures and controls still tend to favor Waterfall. It’s also practical for shorter projects, where the requirements are precise and product definition is stable.

So, if you’re considering employing Waterfall for your next project, here are all the advantages it offers:

Although one might argue that rigidity is a drawback rather than an advantage, the fact remains that Waterfall, by its nature, requires the organization and the project to be strict and well-disciplined.

Larger projects will, by default, necessitate detailed procedures that define their every aspect, from inception to delivery. That eliminates confusion, provides the team members with exact procedures they need to follow, and ensures every person on the project knows exactly what they should be working on across all of its stages.

Since Waterfall is linear, it can be rather difficult or outright impossible to make changes late in the development lifecycle.

However, the Waterfall method does allow alterations to take place early on. In fact, while gathering requirements and performing analysis, changes can be made almost instantly and with minimal effort, given that no coding has been done yet.

Again, the inherent linear structure of the Waterfall methodology proves to be one of its advantages. That makes it an excellent choice for teams that focus on milestones and are most productive when faced with deadlines.

Since the entire project is planned out in advance and all of the stages are clear and easy to understand by all members of the team, creating a timeline and assigning markers and milestones is relatively simple. Clearly defined goals and milestones also enable the developers to measure progress accurately.

With Waterfall, the fate of the project doesn’t rest on the shoulders of any individual team member. Instead, the detailed documentation, fixed design structure, and robust scope of the project allow the work to continue even as team members come and go. The burden of the design falls onto the documentation, which also means all of the knowledge stays within the organization.

All of the requirements are gathered in the first stage of development, which allows the developers to estimate the cost of the entire project accurately. 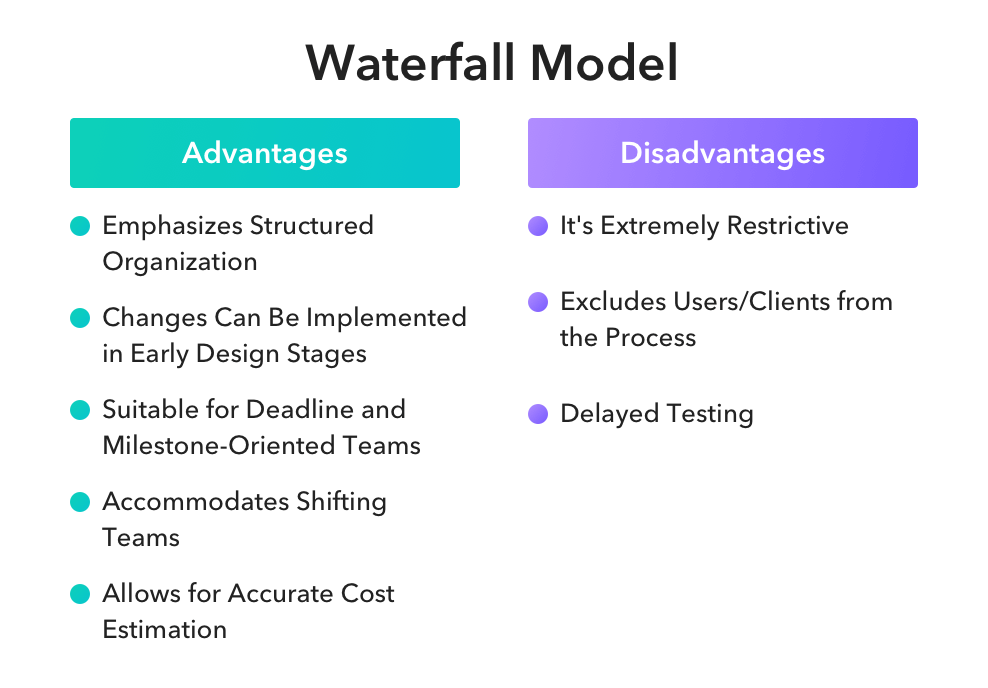 The Disadvantages of Waterfall

That said, the Waterfall methodology also has several drawbacks, which make it unsuitable for some types of projects. Here are the disadvantages you must be aware of if you’re considering Waterfall for your next endeavor:

Due to its linear nature, Waterfall is also extremely restrictive and comes with non-adaptive design constraints. In other words, once the design plan is fleshed out, Waterfall does not allow for any changes.

That can lead to a manner of problems, especially if the testing phase reveals a vital flaw in the system’s design. In that case, the developers must backtrack several stages in the development process and tweak the design.

That is a considerable setback since both the design and coding phases need to be redone. That is not only expensive and time-consuming, but it can also have a devastating, demoralizing effect on the developers.

Although one might argue that such flaws should never occur if the design were well thought out and properly executed, in reality, it’s challenging to account for every possibility beforehand.

Apart from the initial requirements gathering, users and clients have no role to play in the development process. The rigid step-by-step nature of Waterfall doesn’t welcome requirement changes in later stages.

That poses a serious problem if the clients have trouble defining the exact functionality and requirements of a system upfront. If the client needs to see the system in action before confirming it fits their needs, employing Waterfall will likely be both time-consuming and expensive.

Even if that’s not the case, Waterfall still leaves no room for mid-process feedback. Although it’s not impossible for the project manager to roll back the process to any of the previous stages, it would come at a high cost for both the development team and the client.

Unlike modern SDLC models, where testing is an ever-present process all throughout the development, the Waterfall methodology pushes it near the end of the life cycle. As a result, most bugs, flaws, and even design issues get revealed relatively late in the process.

Simultaneously, separating testing from coding may lead to more errors since it indirectly encourages a more lackadaisical approach to coding. Some teams overcome this obstacle by introducing an error management tool, which monitors for and immediately reports any oversights.

When Should You Use the Waterfall Methodology?

Now that you understand where Waterfall excels and where it falls short, it should be a bit clearer when it’s a good idea to employ it. Still, let’s reiterate. You should only use Waterfall for projects when:

Over the four decades the Waterfall model has been around, developers and project managers had sought out ways to minimize its drawbacks while retaining all the benefits this model provides. That led to several modifications to the traditional model.

One extension of Waterfall that’s proven to be quite useful is the Iterative Waterfall Model. It follows the same cascading steps but adds in the much-necessary customer feedback between the phases. That dramatically increases customer interaction, boosts their satisfaction, and ensures that, by the end of the project, the customers get what they want.

Additionally, that makes it possible to make changes or alterations to the previous phase, as well as reduces the time it takes to detect errors and iron out any potential flaws within the system. All of the changes are also reflected in the documentation of the stage they are made in.

That somewhat solves the rigidity problem of the classic Waterfall, but still leaves one vulnerability in the model — there is no feedback path to the feasibility study. So if any errors were made during this stage, they would be impossible to correct.

To fully understand the scope of the Waterfall methodology, it’s best to compare it with other project management methodologies, specifically Agile. The two are opposites, but are equally viable. It’s essential to understand the strengths and weaknesses of each of them to be able to determine which one prevails over the other in different contexts. 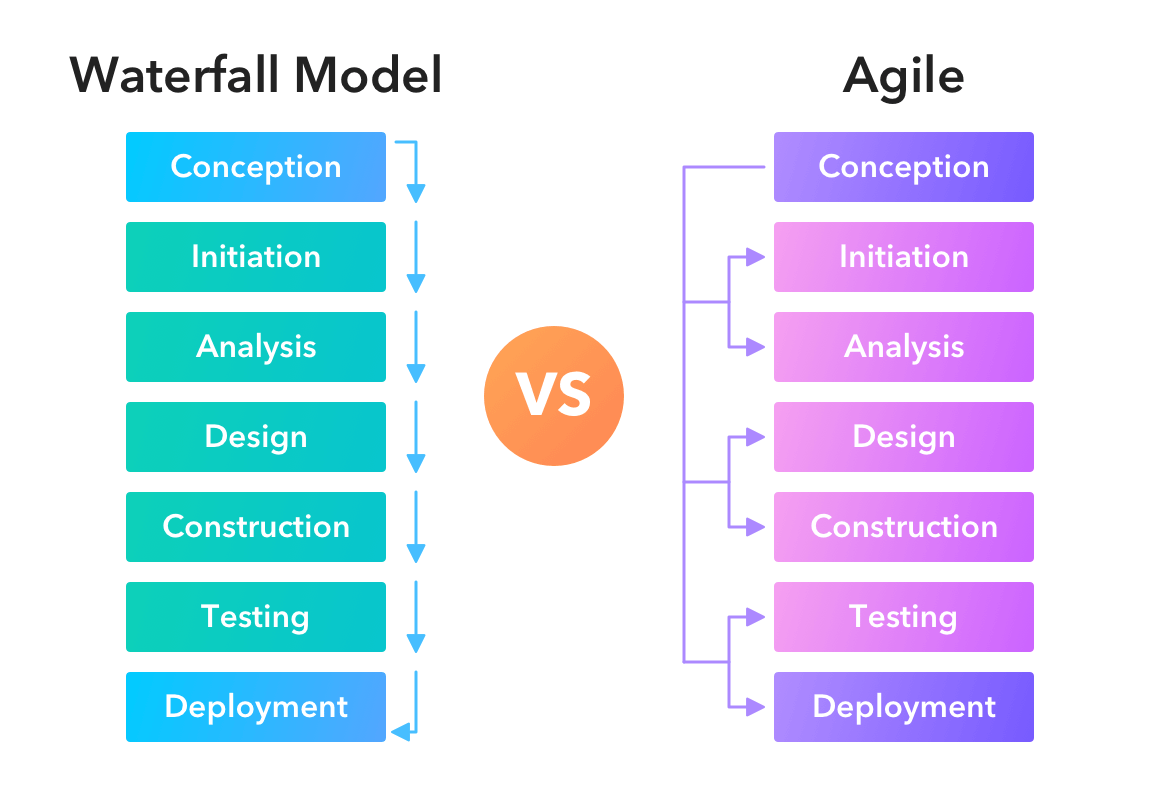 As we’ve explained, Waterfall consists of isolated phases and leaves little room for changes throughout the development process. It’s also linear, in that an entire phase must be completed before moving on to the next. The focus is on extensive documentation, planning, and strict procedures. After the initial requirements have been gathered, clients are excluded from development.

Agile, on the other hand, puts the emphasis on adaptability and flexibility. Opposite Waterfall, Agile embraces changes and encourages interaction, both with the clients/stakeholders and between team members. Rather than planning out the entire project, Agile focuses on short bursts — “sprints,” and regularly delivers features in two-to-four-week periods.

Although Agile is undoubtedly better for projects with ever-changing requirements, it does require an exceptionally skilled project manager who’s able to make sound decisions on the spot. Additionally, since the highlight shifts from documentation to individuals, Agile puts a bit more pressure on the latter. The team must also work well under pressure, thanks to the constantly changing requirements.

As you can see, both approaches offer particular benefits, but also come with specific requirements. To better gauge their effectiveness, it’s crucial to understand one significant difference. Waterfall is linear, whereas Agile is iterative.

With the former, every aspect of the project is planned out before any work begins. Agile, on the other hand, is iterative — new requirements and priorities are continually introduced in the project after each “spring” and feedback session.

Is the Waterfall Methodology Obsolete?

Saying that Waterfall is obsolete would be an exaggeration. Although it’s true that companies are increasingly favoring Agile methodologies, thanks in large to the digital workspace shift, Waterfall still has its uses.

The nature of the project should be what dictates which approach you’ll go for in the end. Waterfall remains the most straightforward model to understand and implement, and it still proves quite effective for shorter projects with precise requirements.

Previous article
Project Management Methodologies
Next article
Agile Methodology: What Is It and How Can Your Organization Benefit From It?
Share This Guide With Your Friends

Lock in our early-bird subscription prices and save up to 76% compared to other tools!
Check Out Pricing …or watch our walkthrough webinar to learn more