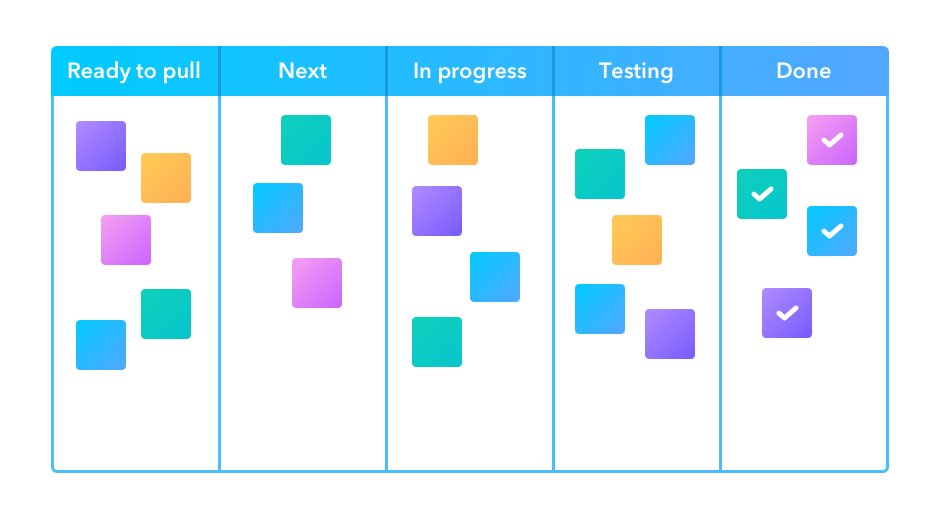 Kanban is a framework that shares several Agile and Lean principles, as well as additional Scrum values. The main idea behind Kanban is visualization during the development process.

The term “Kanban” originates from the Japanese word that means billboard or signpost. Thanks to this workflow management system, team members can easily follow the procedure and improve their efficiency.

Taiichi Ohno was an engineer in Toyota, and he is considered to be the creator of the Toyota Production System that later served as a basis for Lean production in the U.S. The Kanban method is based on visual cues and serves as a method of improving efficiency and performance.

It is important to understand that the Kanban is a scheduling (or planning) method for Lean and JIT (just-in-time) manufacturing. That is, Kanban is just one of the ways to reach JIT.

The Origin of the Kanban Method

Kanban was designed as an improvement of simple visual stock replenishment. During World War II, factories in the U.K. used a similar system while producing Spitfires. Near the end of the forties, Toyota studied supermarkets and the process of delivery and demand. It was apparent that customers would only buy what they need. When they did, the company would replenish the stocks, but only with what they believed would sell at the moment.

Toyota decided to try to implement this method on their factory floor, where a signal would tell the supplier to produce a new shipment as soon as the available one was consumed.

The goal of the Kanban methodology is to implement the rate of demand to control the production. Similarly to the supermarket example, the customer will only buy what they need since the future supply is certain. Toyota also implemented the card method or “Toyota nameplate system.”

Today, Kanban is used by many software development teams and businesses across various areas. The method, as we know it today, emerged in 2007.

This methodology seeks to visualize the workflow and identify potential bottlenecks, thus improving the performance.

The first and most obvious cue is a Kanban board. Its goal is to visualize the workflow, limit work in progress, and increase efficiency. These boards can be either physical or digital.

David J. Anderson, a pioneer in the Kanban field, broke down the board into five main components.

The Five Components of Kanban

Even in the beginning, cards played an essential role in this specific method. They served as a signal to show when the company should move materials within the facility. In essence, the cards were used as a signal that the company was running out of parts, materials, or items.

These cards usually offer valuable information about a specific item. That can include the name of the person in charge, the deadline, task summary, etc.

The main goal of Kanban cards is to:

Similar traits work for both physical and digital cards. Today, you won’t find many physical ones since software-based on Kanban can offer so much more. These digital cards can show the person assigned to the task, cycle time, and any potential subtask.

Moreover, teammates can add comments, files, external links, and anything else. That results in better communication between the team members and inspires collaboration.

Swimlanes represent a form of categorizing and tracking different tasks. Usually, they are represented by a horizontal line that divides the board into two or more segments. One of the main uses of swimlanes is to separate various types of content (e.g., text and video).

The upper part of the board can serve for text, while the bottom one is for video. Since these two categories are non-sequential and different in nature, the team will separate them to allow easier following and a better flow.

It might also be a good idea to add WIP limits to both categories.

The most common types of swimlanes are:

There are four main principles for everyone looking to increase efficiency and productivity:

To fully implement this methodology into your business, you will need to understand the six core practices of Kanban. We already mentioned some of the practices that are essential for the proper implementation of the method. 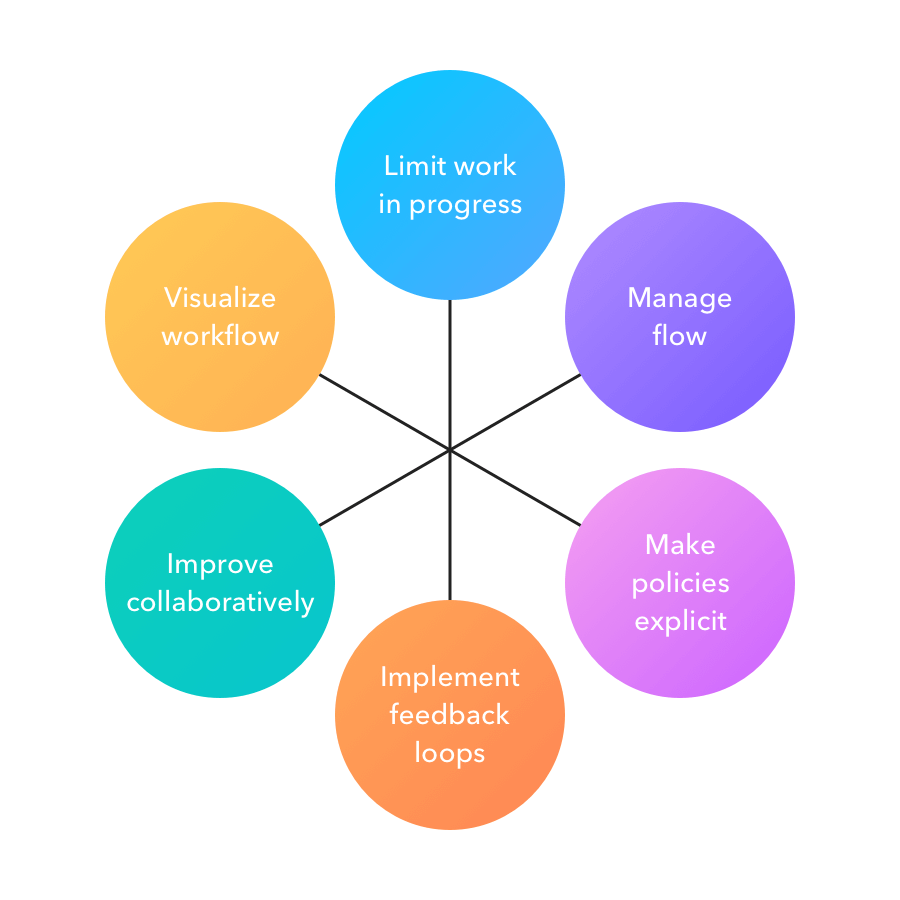 Probably the most important Kanban practice is visualization. Each member of the team will need to understand what it takes to create a deliverable product.

To successfully achieve that, the teams will use boards with cards. As the team progresses through the flow of work, they will move each card across the columns until they reach the delivery phase.

It seems that many prefer this approach since they can actually see the amount of work they have, the time it takes to finish a task, risks, etc.

To avoid multitasking or transferring team members in the middle of the work, you will need to limit the available work. WIP limiting is an essential part of Kanban, and it can easily shed light on potential obstructions or bottlenecks.

As we previously saw, you will need to limit the number of cards on each column. To add a new one to the column, the team will need to solve a previous one to “free space” for the next task.

The main reason why companies implement Kanban is to enable a smooth and healthy flow. That is, instead of managing people, you should manage the work they do. The team will use previous information gathered on cycle time to understand the current state of work better.

The team will have a hard time improving something they don’t understand. Each stage of the project should be clear and explicit.

If the entire team is familiar with goals, the scope of work, and every detail, they will have an easier time making decisions that can set you in a positive direction.

Furthermore, the team should create rules at the beginning, so that everyone knows when they can move cards to the next column and how to manage tasks.

In Lean philosophy, regular meetings are necessary for the feedback loop or knowledge transfer. Most teams have daily meetings in front of the board and discuss the process, challenges, and ways to improve and eliminate waste.

These meetings should never last long, and they are commonly between ten and fifteen minutes long. Ideally, they will have a fixed hour, and always with a strict point.

The Kanban methodology will illuminate areas that strive for improvement. Once the team understands what they need to work on, they can develop a means to solve the problem. The only way to keep improving is by sharing the vision and understanding of the obstacles that may occur.

Teams that share ideas, vision, and understanding of the project will have an easier time finding the next step for improvement.

Advantages of the Kanban Methodology

More and more companies are opting for Kanban project management since it is so much easier to bring order and understanding to every member of the team. The main advantage of the method and its tools is simplicity.

Since the board is a visualization tool, it became a central hub for information. All tasks on the board are visible, transparent, and they won’t get lost in the process. If any team member needs an update, they can simply throw a glance at the board.

Every problem, issue, risk, or bottleneck is easily spotted. If the column reaches the WIP limit, it will be apparent that something has to be done. This way, it is unlikely that the problem will stay unspotted for a long time. Executives can monitor the workload, which can result in increased efficiency.

Kanban went a long way in the past few decades, and the main reason is flexibility. You can find elements of this method anywhere from IT and marketing to HR.

Implementing Kanban doesn’t require a significant change or shift in priorities — it only focuses on improvement.

Because the Kanban board is the primary tool in this methodology, most problems can occur because of its misuse.

If the team fails to update the board, it can lead to problems in the development. On the other hand, if they keep updating it too much, it will become unmanageable and complicated. That means that the result will be unusable and messy.

Some teams might have trouble navigating and maintaining the board and other tools. Since the work continues until delivery, it is sometimes challenging to predict timelines.

Who Should Use It and Why?

Any team that’s able to deliver quick work can use Kanban to improve their work even further. Unlike Agile, Scrum, and other methods, a team can pick only elements of Kanban that they deem beneficial. Naturally, they can use all principles and fully implement this methodology.

In essence, any business or agency can benefit as long as it relies heavily on the completion of tasks.

It is also not rare to see companies using a hybrid of Scrum and Kanban (also known as Scrumban).

Companies often have a hard time deciding whether they need Scrum or Kanban methodology.

There are so many differences between the two. For example, the Scrum method has three main roles (the development team, scrum master, product owner), while Kanban has none.

However, even though they seem unrelated, Scrum and Kanban share the same principles. So, instead of choosing between the two, the company can use the best of both worlds. Usually, teams will use the Scrum structure mixed with the visualization and flexibility of Kanban. It is also one of the best options for teams looking to transition from one to the other.

Previous article
What Is Lean Methodology and Is It for You?
Next article
Prince2 Project Management Methodology: What You Need to Know
Share This Guide With Your Friends

Lock in our early-bird subscription prices and save up to 76% compared to other tools!
Check Out Pricing …or watch our walkthrough webinar to learn more